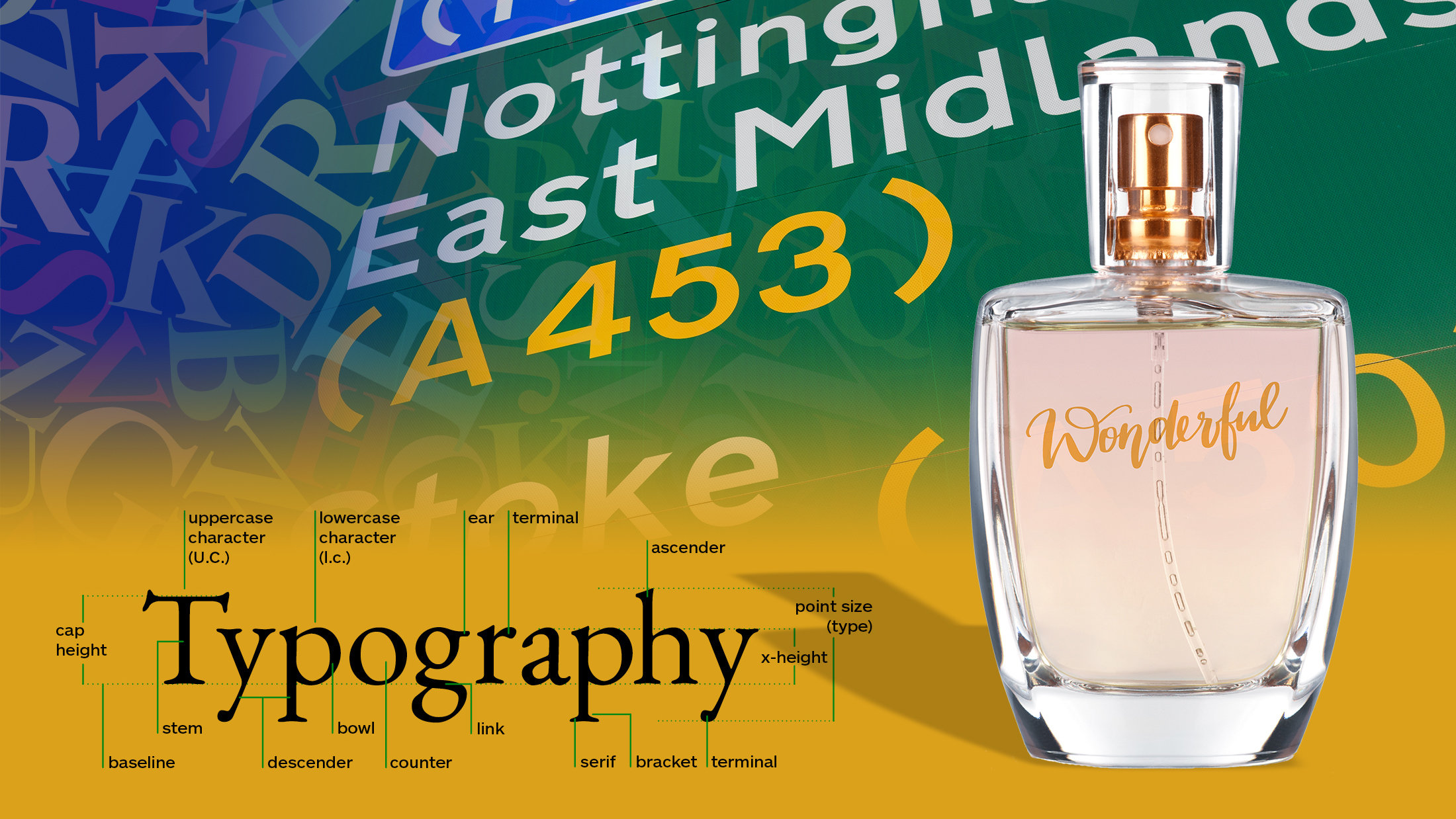 Imagine a parallel universe where there’s only one typeface in existence. How would we convey the radically different messages we see on, say, motorway signs and advertising for women’s perfume? Selecting typefaces which provoke the desired reaction in the client and reader has to be one of the most interesting and satisfying elements of a graphic designer’s job.

Fortunately, there’s an abundance of typefaces in our universe to choose from! Some very familiar household names, like Helvetica and Times New Roman, as well as thousands of lesser-known varieties. The key to any piece of graphic design is selecting typefaces to suit the project and the message the client wants to get across.

There’s so much to consider when it comes to choosing typefaces – they’re much more than just a pretty face! If the designer isn’t presented with a comprehensive set of brand guidelines, they will use their experience and skill to answer questions like, ‘How will the typeface be viewed – up close on a letterhead or from a distance on a billboard?’, ‘Which typeface fits the tone of the piece?’, ‘Which fonts complement each other?’, ‘What are the current font trends to make the piece contemporary?’, and so on.

I won’t get into the finicky matters of kerning, small capitals, non-lining numerals and baseline grids, but it is worth listening to my inner geek while I cover a couple of basics about typefaces, fonts, and types of fonts…

This gets typography nerds into a bit of a lather, although these days most people use the terms interchangeably. To cut a very long story short, ‘Typeface’ refers to the design of the letterform, whilst ‘Font’ is the delivery mechanism (i.e. the bit of software) that allows you to install, access and output the design. This all had much more significance back in the days of metal type, but not so much now we’re all hooked up to our desktops.

There are three types of fonts:

True Type
Created by Apple and Microsoft and released in 1991 for use in their operating systems.

Opentype
Developed in 2000 by Adobe for use across multiple platforms, opentype files support up to 65000 characters which allows for numerous styles and variations to be contained in a single font file.

So, Postscript / Type 1 fonts were created nearly 40 years ago. Yes, the software is pretty ancient, although it is currently still supported. The key thing that any designer who knows their onions will tell you is that these fonts won’t be available from January 2023. What this means to the client with a huge back catalogue of printed material, is that it will be possible to reprint those documents but no longer edit the text therein from the end of this year. This may well be quite a big deal to a lot of people but fear not, there are solutions!

In some cases there may be an equivalent Opentype font which can be substituted, or your clever designer might be able to find an alternative but very similar font (using their skilled eye to decipher stems, bowls, serifs, terminals…) which will allow for a reasonably seamless transition, but it’s worth bearing in mind that any change in corporate typeface (whether it’s because of the demise of postscript fonts, or re-branding) will probably mean the text in your existing documents will re-flow, causing a change in page counts and likely the requirement to move accompanying imagery, tables or graphs.

The subject of typography is vast and fascinating – viewed from a historical perspective it charts the development of the printed word from as far back as the 15th Century, and there are lots of really interesting books, if you’re inclined to learn more. Alternatively, trust in your designer to handle your words with the utmost care and create a timely, functional and beautiful document – whatever it may be!

Cancel Reply
We use cookies on our website to give you the most relevant experience by remembering your preferences and repeat visits. By clicking “Accept All”, you consent to the use of ALL the cookies. However, you may visit "Cookie Settings" to provide a controlled consent.
Cookie SettingsAccept All
Manage consent

This website uses cookies to improve your experience while you navigate through the website. Out of these, the cookies that are categorized as necessary are stored on your browser as they are essential for the working of basic functionalities of the website. We also use third-party cookies that help us analyze and understand how you use this website. These cookies will be stored in your browser only with your consent. You also have the option to opt-out of these cookies. But opting out of some of these cookies may affect your browsing experience.
Necessary Always Enabled
Necessary cookies are absolutely essential for the website to function properly. These cookies ensure basic functionalities and security features of the website, anonymously.
Functional
Functional cookies help to perform certain functionalities like sharing the content of the website on social media platforms, collect feedbacks, and other third-party features.
Performance
Performance cookies are used to understand and analyze the key performance indexes of the website which helps in delivering a better user experience for the visitors.
Analytics
Analytical cookies are used to understand how visitors interact with the website. These cookies help provide information on metrics the number of visitors, bounce rate, traffic source, etc.
Advertisement
Advertisement cookies are used to provide visitors with relevant ads and marketing campaigns. These cookies track visitors across websites and collect information to provide customized ads.
Others
Other uncategorized cookies are those that are being analyzed and have not been classified into a category as yet.
SAVE & ACCEPT